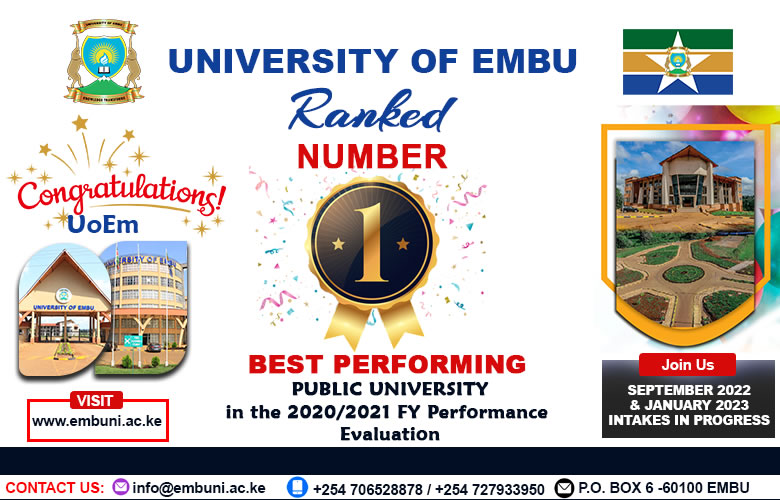 The University of Embu is once again celebrating after being declared the best performing public university in Kenya during the 2020/2021 Financial Year, Performance Contracting cycle. The good news was contained in a report dated April 2022 released by the Ministry of Public Service and Gender, and signed by the Cabinet Secretary, Professor Margaret Kobia.

In the report for the 2020/2021 Financial Year evaluations for all Government Ministries / Departments / Agencies, State Corporations and Tertiary Institutions, the University of Embu was also named the Overall Runners-Up – i.e. the Second Best Performing State Corporation with a composite score of 1.9290, which placed the University in the Excellent Category behind the National Irrigation Board which attained a composite score of 1.8890 to scoop the First Position. There were a total of 232 State Corporations evaluated, out of these, eight (8), representing 3.4% attained an Excellent Performance Grade, while 36% attained a Very Good Performance Grade. Another 140 state corporations, representing 60.4% achieved Good, Fair or Poor Performance Grade. This means they did not achieve their performance targets.

In his remarks after receiving the results, Prof. Daniel Mugendi, the Vice-Chancellor, UoEm, thanked the University Council, Management, Senate, Staff and Students as well as all the stakeholders for their commitment and contribution towards the good performance of the University. The VC also commended the Directorate of Performance Contracting and ISO led by Dr. Kirema Nkanata, for their efforts in the achievement. “This achievement is a significant indicator of our emphasis on quality, teamwork and the unwavering focus on the realization of our vision of being a dynamic epicenter of excellence in training and research for service to humanity,” said an elated Prof. Mugendi.

The Top Ten Best Performers in the Public Universities Category

The table below shows the top ten performers in the Public University category and their composite scores.

The Criteria – How the PC Evaluations are Done

The performance contracting evaluations serve as one of the Government’s strategies for enhancing efficiency and effectiveness in public service delivery. The performance of public institutions is usually evaluated based on the following criteria;

The evaluation is categorized into five performance grades as follows;